We must also defend opponents from injustice 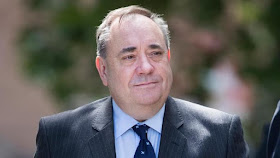 The problem is that I can only very generally remember 2013. I couldn’t tell you for certain what I was doing on any day in that year. I simply don’t remember. I might be able to look up diaries or check other sources of information, but otherwise if you asked me what I was doing on November 15th 2013 I wouldn’t have a clue. I couldn’t even tell you with certainty that I was in the UK. I might have been on holiday.

So if I don’t know who has accused me and I don’t know what it is I am supposed to have done or when, I have no way of saying I didn’t do that, because I don’t even know what that refers to. I might remember generally that I have never physically assaulting anyone, but I can’t specifically defend myself against an accusation unless I know what it is.

My guess is that if someone accused me of physically assaulting them five years ago, but with no more evidence than their witness statement, no-one would even bother to investigate. Likewise if I said that my house was broken into five years ago, but I have no evidence for this apart from my witness statement, the police are not going to waste any time trying to discover the supposed criminals. If I say that I witnessed a murder, but there is no evidence even that the supposed victim is dead let alone that I saw it, my witness statement will not be taken seriously. I will likely be accused of wasting police time.

I disagree with Alex Salmond politically, but justice ought to transcend political difference. We have rules about evidence for burglary, for murder, for physical assault and for fraud etc. that depend on objectively verifiable facts. Everyone is innocent until proven guilty and in order to be proven guilty there has to be evidence that proves that guilt beyond a reasonable doubt. I am in no danger of going to jail for burglary unless witnesses can establish that I broke into the house, my fingerprints were found at the scene of the crime, the stolen goods were found in my house or unless I make a confession. No judge is going to send me to prison because of a single witness statement about a burglary that happened five years ago for which there is no other evidence.

But somehow we have established a class of crimes, which must be investigated even if there is only a single witness who states something happened years ago and there is no other evidence at all. This single witness statement which would not be enough to convict someone of burglary, murder, physical assault or fraud, is taken seriously in only one type of case. These cases always involve sex.

Why should there be a special class of crime for which the normal rules of evidence are suspended? Would you feel safe if a single witness could convict you of burglary, murder, physical assault or fraud, even if there was no other evidence? I wouln’t. So why should that single witness be enough to convict someone in a case involving sex?

There is something deeply unjust going on in the world at the moment. People’s reputations are ruined because someone makes a claim, which may or may not be true, but for which there cannot possibly be any other evidence.

Imagine there was a ceilidh in Aberdeen in 2013 and I went to it. Imagine if now in 2018 a man complains that I put my hand up his kilt and sexually assaulted him. How am I supposed to prove whether I did or I didn’t? The only witnesses are me and the man. Who are you supposed to believe? There may be all sorts of reasons why this man wants to ruin my reputation. On the other hand I may have assaulted him. But it is simply impossible for us to find out now.  He should have complained there and then during the ceilidh in 2013. Perhaps then it might have been possible to determine what happened. But there is no point whatsoever waiting five years and then making claims that cannot be verified either way.

I have no idea what Alex Salmond did or didn’t do. But I dislike intensely how people’s reputations are being ruined because of accusations that cannot justly be proved one way or the other. We have already seen how Cliff Richard’s life was shattered by accusations that turned out to be false. Leon Britton died while being accused of abusing children based on evidence that later turned out to be discredited. Other people’s lives have likewise been ruined because of accusations about things that supposedly happened decades ago.

Sexual crimes are as serious as any other crime and people who commit them deserve to be punished severely, but the evidence that convicts must be just as strong as in the case of burglary, murder, physical assault and fraud. This is not least because sexual crimes are so serious, are rightly severely punished and have a more damaging effect on someone’s reputation than most other crimes.

I think Metoo has become a very dangerous witch-hunt, which is leading to great injustice. For this reason it is deeply immoral. The only way to stop it is this. People who make claims of any form of sexual assault must be told that they have to make the claim immediately and provide evidence which corroborates their claim to having been assaulted. Making a statement that you were sexually assaulted five years ago without any other evidence should have no more likelihood of convicting anyone than making such a claim about a physical assault or a burglary.

Women’s lives are being ruined by sexual assault and to make it easier for them to convict those they accuse they are routinely given anonymity. But the lives and reputations of those who are accused are often ruined too. Cliff Richard, I suspect, is at least as damaged because of the false accusations made against him than many victims of sexual assault. For this reason only those actually convicted of sexual assault should have their names revealed in the papers.

Whether innocent or guilty the name of Alex Salmond is liable forever to be associated with whispers about sexual assault. If it turns out that he is innocent, this will be very unjust indeed. It would be far better if none of us knew about this case until and unless Mr Salmond is convicted. But for the sake of justice let him also know what he is accused of, let him have a chance to defend himself and if he is convicted of anything let it require more than just his word against that of someone he perhaps hardly even remembers.
effiedeans at 19:52
Share
‹
›
Home
View web version