Journalism is missing the mood of the country

Twitter is an interesting metaphor for infectious diseases. I write something. It might be seen be some of my followers, but it has to compete with what everyone else is writing so it might be ignored. If someone retweets, it might be seen by any of their followers, but just occasionally a tweet captures the mood and suddenly it spreads and spreads way beyond what I might have expected when I wrote it.
Recently I wrote:

Journalism is missing the mood the country. We don't want blame, we don't want argument as if this were a General Election, we want a contribution to the national effort to get us out of this crisis. We want hope optimism and faith in our country. We need less negativity.

This tweet has been liked and retweeted more than any other tweet I have written. Some people objected. It became clear from reading their responses that this was usually because they were hostile to the Government either because they voted for someone else at the last election or because they voted Remain in 2016. They too were missing the mood of the country. 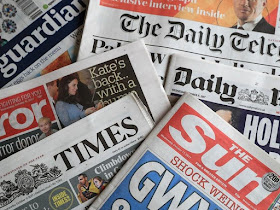 What strikes me most from my online interactions is that ordinary Brits have gone beyond politics. We understand that we are not fighting a General Election. We are fighting the worst pandemic in the past one hundred years.

Morale does matter. So does national unity and a sense of common purpose. When Boris was sick, and Dominic Raab said he was a fighter, some journalists didn’t get it. They objected that it implied that those who died were weak. It didn’t. Raab was simply expressing hope. He was being positive. If Captain Tom got sick, we would all call him a fighter. We would do so no matter the outcome.

A person or a people who believe they will win in the end is much more likely to do so. This is why morale matters so much to armies. It has on numerous occasions seen a smaller force beat a larger force. Morale can cause miracles not merely in battle but in illness. Being brave, optimistic and full of faith does not guarantee that you get better, but it helps. Thinking your case is hopeless and you are bound to die sometimes guarantees that you do. This is what the country gets that journalists don’t.

I have been impressed by a few journalists in the past weeks, but not many. I think the BBC Horizon team have done an outstanding job in helping us understand the nature of the illness we face. Some economic journalists have done a good job in explaining the economic consequences of the worldwide lockdown. One or two political journalists have given us some help in understanding Government thinking. But journalists for the most part have disgraced themselves.

There are people I usually enjoy reading who frequently make interesting points about society and politics who are simply showing their lack of knowledge today. Too many journalists who think there is only one story to write about skim a few medical journals and then think they are qualified to tell the rest of us what should be done. They go from one extreme to other and pretend to have a knowledge that they don’t.

Twenty-four-hour news programmes are full of relentless negativity. They pick up on one issue such as ventilators go with that for a few days and then obsess about Personal Protective Equipment (PPE). Next we get comparisons between countries. This country has more deaths than that country as if it is some sort of Olympic medal table. Why can’t you get PPE? Because everyone else in the world wants it too. But shouldn’t you have prepared? Would you like to apologise for your failure?

The worst of all is the daily press briefings. We listen to some of the best minds in the country explaining to us what is being done and why only to have a series of ignorant childish questions from journalists trying to score political points and trip up a minister. No wonder most of us switch off when we get to that point.

There has never previously in the whole world been such a lockdown. The only insight from the Sunday Times was that hindsight is a wonderful thing.

The first thing you learn in history is that people make mistakes. Faced with unprecedented situations they make lots of mistakes. When I first started reading about Covid 19 back in January I read everything I could find on the subject because I was planning to make a trip to Central Asia. I told myself I’d be OK and booked my flight. I was lucky that it was cancelled, or I might be stuck there yet. I would have made a terrible mistake otherwise.

I didn’t read a single journalist in January or February who predicted that Britain would be locked down in March. I read lots of journalists who said that Covid 19 would be no worse than seasonal flu and we had nothing to worry about. I didn’t read a single journalist who in mid-January accurately predicted how the virus would spread worldwide nor one who said that we should lockdown immediately.

If we had had the modern journalist profession in 1940, we would have lost the war. They would have complained about the Governments disastrous mistakes at Narvik.  It should have known that the Maginot line wouldn’t work. Journalists would have demanded that Churchill should have been immediately sacked for the defeat at Dunkirk. They would have described our situation as hopeless and would have ridiculed our ability to fight them on the beaches and would have said it was mere arrogance to suppose that our pathetic little country could have a finest hour. After all the Germans do everything so much more efficiently than we do. They would have listed all the mistakes our country had made and called it insight. The British people however would not have listened to them then, just as we don’t read them now. Newspapers are going out of business. They deserve to.
effiedeans at 08:45
Share
‹
›
Home
View web version